Ugly Bass Face A beginner bassist's foray into the unknown 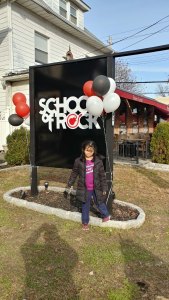 School of Rock just opened a new location in White Plains, about 20 mins north of us. Its a franchise that claims to be “a music school for all skill levels, ages, and musical aspirations. With students ranging from toddlers to adults, School of Rock is where music students grow into real musicians.” Facebook has been running ads for it for the past few weeks, which put it on my radar. Today was the grand opening, so I packed up Bopps & the wife, left the baby with my parents and we took a trip to satisfy our curiosity. We were impressed with their setup, and by the end of it had signed Bopps up for weekly guitar lessons.

The school basically caters to small groups of people, usually no larger than 6-7 people, in a similar age bracket. For Bopps, that age range is 6-7 years old. They’re able to experiment with guitars, basses, keyboards, drums and vocals to see what they like, and then they can take lessons focused on a given instrument. As per the grand opening, potential students were given a free 30-min lesson, so we left Bopps with a guitar instructor and toured the facility.

END_OF_DOCUMENT_TOKEN_TO_BE_REPLACED

So, this week I started practicing major chord inversions as a warm-up exercise on bass. Inversions are chord permutations. Right now, I’m just doing really basic ones – we take a major chord (root, 3rd, 5th) and change the order of the notes being played.

Those patterns can be played on any root, or in any key, of course. If you play in F-major, you’ll need to account for open strings, of course. This might be true for other keys way down the neck as well.

END_OF_DOCUMENT_TOKEN_TO_BE_REPLACED

The other day, I watched Adam Neely critique the movie Whiplash (2014), which I dug when I saw it a few years ago. Its a story about an ambitious and talented jazz student and his volatile, perfectionist instructor/big band leader. It was… intense. Adam enjoyed it as a movie, but didn’t find its connectivity to jazz accurate, and felt that it was mean-spirited – which concerns him as its currently the only representation of the jazz school/musician scene on film.

Whiplash (as reviewed by a jazz musician)

END_OF_DOCUMENT_TOKEN_TO_BE_REPLACED

I’ve been practicing on-and-off over the past few weeks, but I’ve not been blogging much. Some practice material has been from the Hal Leonard Bass Method and some has been from YouTube videos or snippets I’ve read from other books, and in a few cases even from perusing older posts here!

Its been a while since I posted a warm-up exercise, so this is what I’ve been using this week. Its just a small Phrygian pattern using all 4 fingers that I run along the Cycle of 4ths on the E string and then again on the A string.

END_OF_DOCUMENT_TOKEN_TO_BE_REPLACED

The Schecter Stiletto Studio-5 is an amazing bass. Its easily my favorite, out of the ones I own. As much as I love how it feels and plays, there were two things I wanted to change as well – (1) the bottom of my strap kept coming loose from the bass, so I needed to find a way to keep it secured and (2) I wanted strings that were smoother to the touch so that I can practice more easily, and I also don’t prefer how most roundwound strings sound – they tend to have twang that I don’t like in a bass.

A few weeks ago, I looked to Sweetwater and ordered two items to correct the issues I had with the bass. The first was a set of Dunlop strap locks. I’ve never used them before, but what I learned of them online made it seem like they were the solution to the problem of the bass slipping and taking my kneecap with it. The 2nd was a new set of bass strings: La Bella Gold Flats (they come in 4, 5 & 6 string packs). Both arrived yesterday – there was a delay because Sweetwater had received a bad batch of strings, and so was out of the La Bellas that I ordered.

About a month ago, I grabbed a Music Man SUB Ray4 from Reverb. While doing that, I learned that Sweetwater was running a promo that allowed almost everything on its site to be bought with up to 48-months of interest-free financing. When I got the Ray4, I was initially looking at a Schecter Riot 5-string. It wasn’t available after I ordered it. This led to my purchase of a Schecter Omen 5-string, which I really liked a lot, but there was fret buzz that I couldn’t get rid of, so I returned it.

With the Omen out of my hands, I kept thinking about how the neck felt. I love how the Schecter neck feels. Sweetwater’s financing deal led me to take a leap and grab a bass that I normally would never consider due to its price: I ordered a lefty Stiletto Studio-5. It took a few weeks for Sweetwater to get the bass and then send it out to me, but once they shipped it, it arrived in 2 days via FedEx, and it was worth the wait.

END_OF_DOCUMENT_TOKEN_TO_BE_REPLACED

I just watched a really interesting video from Scott’s Bass Lessons – this one was from Toronto bassist Rich Brown. In it, Rich took a simple bass lick made up of the first 4 notes of the G minor pentatonic scale and showed how, by simply playing it starting on a different beat, it becomes a different bassline, sonically. The notes are all the same, although he changes from playing them long (legato) to short (staccato); but the sound and because of that, the notes he uses in fills to connect bars, completely change simply due to starting one 16th note later.

Towards the last minute of the video, he moves the line forward one additional 16th note, and again, it completely transforms. This is a fascinating phenomenon to me. It shows how any bassline, even if its played in nearly the same way, effectively has 16 variations that substantially alter how its heard, just by starting it on a different subdivision of the beat.

Also – I love his bass tone. What he’s playing is apparently called an F-bass, and the 5-string version costs about $4,000!

Talkingbass – The Most Useful Music “Theory” You Can Learn!

Mark Smith from Talkingbass just released a new video today with a somewhat clickbait-y title: “The Most Useful Music ‘Theory’ You Can Learn!”. I like his channel a lot, and was naturally curious about what this most useful concept could be. Was it scales? Chord tones? The Circle of 4ths or 5ths? It turns out that it was none of these, but was something else that I know I need to work on: intervals!

The Most Useful Music “Theory” You Can Learn!

END_OF_DOCUMENT_TOKEN_TO_BE_REPLACED

Daric Bennet goes over shapes and sounds for the Major 7 chord, Minor 7 chord, Dominant and Minor 7 Flat 5 (also called the half-diminished chord). I’ve seen these before in other places, but what he does is interesting – I usually see people play the 1-3-5 when they use the notes from these chords as arpeggios, or when they play chords higher up the neck on the bass. Daric favors the 1-3-7, with the understanding that the sound of the 5 gets lost amid the 1 and 3 in different musical contexts. I’ve never seen anyone really take that stance and drill it the way he does.

END_OF_DOCUMENT_TOKEN_TO_BE_REPLACED

I grabbed a new lefty 4-string from Reverb. Its a Sterling Music Man SUB Ray4. I probably shouldn’t have, but since I can pay it off over a year, its much more palatable – and I’ve wanted a new 4-string for a while now. If Sweetwater carried the SUB Ray series, I’d have gotten it there and stretched it out over a 3-4 year period, with no interest.

The bass arrived yesterday, but I didn’t get to really check it out until later at night. Its very comfortable, but in comparison, I do like the Schecter neck more. Its also somewhat thicker than my old Ibanez – both the body and the neck. It plays pretty nicely and feels very solid. The only issue was, again, fret buzz on the E string.

I tried adjusting the action of the E string by raising the saddle that the string sits on. It started at 2/16 of an inch. I raised it up as high as maybe 3.5/16, and did get rid of some of the buzz, but not all of it. I also lowered it, as an experiment, but that didn’t help.

While adjusting it, I found that when it was too low, if I played the A-string, the E-string would “clack” against the frets when my fingers passed through the A-string and rested against the E.